Two strands of gold, or silver, twisted clockwise, there in just a few words, you have filigree. 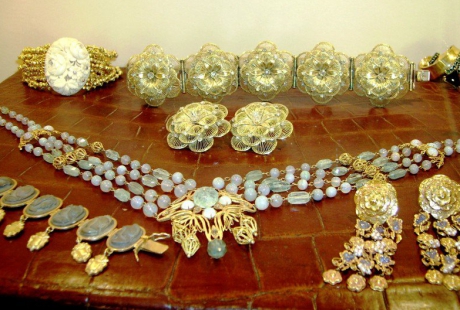 Yes, just a few words, perhaps too few, because if you try to look closely at a piece of jewellery made following this technique, you will be amazed at the harmony, beauty and exquisite detail that can exist in such a tiny space of twisted and curled strands.

Sardinian filigree displays highly concentrated patterns, a pressing symbolic vortex with roots far back in time, perhaps in ancient Egypt, and later developed in the workshops of the great goldsmiths of Agrigento, Naples, Florence, Genoa, Turin, Venice, and of course in Sardinia, where filigree became widely used, for example to make the exquisite buttons of some traditional costumes.

While today Sardinian filigree is used in some very original creations, it also often reflects a sense of continuity with the past, as if it were covered in a patina of antiquity, a sort of cultural oxidation. We should consider that in the past the design of jewels changed very slowly, for a specific reason: society was organised according to a very rigid hierarchy, it had little mobility, and since jewellery was intended to signal social status, it needed to embody some of the fixity marking social stratification. When the ‘lower classes’ too did own items of jewellery, these were no longer in the fashion of the higher classes which, by then had replaced them with new designs. And that’s why jewellery is marked by a sort of ‘stickiness’, a certain resistance to change, like an echo spreading slowly and progressively through all the successive layers of culture in a certain period of history.

Sardinian filigree reflects these social dynamics, it speaks to us of nobles who had everything and could adorn themselves with these true works of art created by the masters of the miniature, but it also speaks to us of humble folk who only thanks to their grinding labour had managed to achieve a respectable status and who in the earring or wedding ring in filigree found stylish and stable exterior confirmation of this fact. That’s why you should consider including in your Christmas shopping an artefact in Sardinian filigree, so that you too may be captured in this minuscule vortex, strictly clockwise fixed and twisted.