You might find it written Calich, Kalich, Calik or Càlic, some call it the Calich marsh, others the Calich lagoon and yet others in the dialect of Alghero call it Estany del Càlic. 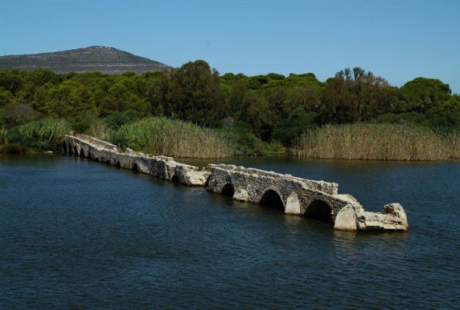 All these variations are based on the fact that this is a tract of intermediate land, something in the middle, and as such not adaptable to a single spelling or diction. Its various names contract and dilate as happens with the shallow waters of this lagoon according to the heat of the sun and the rain. This is a phenomenon still little known to linguists – we have called it “syllabic evaporation”.

Whatever its name, we can attempt a brief – yet accurate – description: the Calich Marsh is an extensive salty wetland area which runs from the north edge of Alghero to the hamlet of Fertilia; it is 2650 m long and covers an area of 97 hectares. It has the vague shape of a goblet (calice – hence the name Calich), whose stem consists of a somewhat slim branch which penetrates the Nurra region and has the name of Calighèt, or Small Calich, as distinct from the larger Calich.

Running parallel to the sea from which it is on an average 400 m distant, it communicates with it by a small canal port in the area of Fertilia, which is 60 m long and 2 wide, crossed by an ancient bridge of Roman origin which today however leads nowhere. Ten of its 24 original spans were indeed demolished in the 1930s to allow the passage of a large dredger used in the reclamation of the wetland which at the time was a breeding ground for malaria: if we were mosquitoes, that bridge would be the symbol of the hate which human beings have always reserved for them.

We’re sure you will remember these words of Montale, the famous Italian poet: “Hark, the poets laureate / move only among the plants / with little used names / marsh plants or acanthus”. And yet in the Calich Marsh the poets laureate found their ideal habitat, moving among plants such as sea lavender, helichrysum, tree spurge, thymelaea, centaurea horrida, astragalus massiliensis, limoniastrum monopetalum, sea aster, saltmarsh tuber-bulrush and common reed. Apart perhaps from the common reed, we must admit that the other names to us (certainly not poet laureates) mean very little, but we decided to quote their names anyway because they have a very nice sound, albeit not as nice as the whisper of the wind as it passes through the plants – creating a chime of plant bells.

This sound is joined by the soloist calls of the many bird species which live, breed and winter in the marsh: just a few examples – the mallard, with its fine emerald head; the Black-winged stilt with its thin long legs, perfect for marsh habitats; the pink flamingo with its marvellous plumage, worthy of the night of the Oscar Awards; the heron with its slim beak, almost like chopsticks ready to seize the tiny fish served in this excellent sushi bar which the Calich provides.

And at this point we feel we have said all that needs saying – all you need to do now is go and see the area for yourselves, let the words evaporate from your head, leaving behind a layer of reality from 50 cm to 1.5 m high, an expanse of calm, placid things, just things to look at, listen to and smell, whatever the poets laureate and their extenuating verses might say.