If you want an immediate idea of the essence of any city, forget about tourist guides and long lists of online reviews. 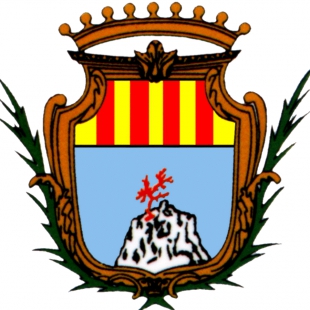 The best and quickest way is to take a close look at its historical coat of arms, which serves as a graphic record of the ancient stories and distinctive characteristics of the place. So, let’s have a look at the coat of arms of Alghero.

As you know, there is a specific language to describe coats of arms and standards, a rather strange jargon, very synthetic and elliptical, but at the same time fascinating, with an aura of ancient times, learning and yellowed documents. So we intend giving you an exact description of Alghero’s coat of arms: “blue background with black rock topped by a branch of coral; in the top portion, the coat of arms of the Crown of Aragon i.e. four red bars (pallets) on a gold background”. Great – but what does it mean?

Firstly it means that Alghero has maintained a firm memory of its Catalan origins: the “four red pallets” are indeed the so-called “Bars of Aragon”, awarded to our city in 1355 by the King of Aragon Peter IV the “Ceremonious”. They indicated that the town was not under the control of any feudal lord but was directly subject to the King of Aragon - Alghero stepped out of the Middle Ages during the Middle Ages itself.

Then, there’s the sea, the blue surrounding the rock. And we wonder: is this Alghero emerging from the sea or sinking into it? The coat of arms gives no answer to this question, which in fact is not a problem at all, but a prodigy. And what about the key element, the “black rock topped by a branch of coral ”? The original coat of arms awarded by Peter IV was a little different here: the branch of coral emerged from the waves of the sea, as a more direct symbol of coral fishing. It was only later that the coral branch was shown on a rock, perhaps to identify the city with its most precious resource.

Be it as it may – the elements of the relationship are clear: Alghero-sea-coral, and that’s exactly what you will find when you visit us.