The statue of Our Lady of Bonaria: the story of a chest that refused to sink 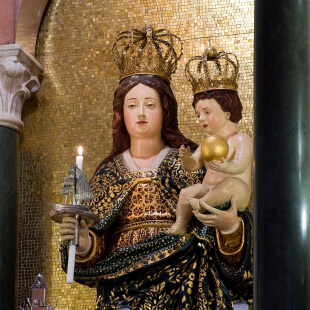 And it is from there inevitably that the outside world comes to the island and becomes part of the island’s internal world. Thus, a shipwreck may become, instead of the end, the beginning of a new story, the discovery of one’s true home, provided there is at least an island to cling on to. One such instance of sea currents and impromptu landings is the story of the statue of Our Lady of Bonaria, the ancient wooden statue of the Virgin held in the sanctuary of Bonaria in Cagliari. To let you understand the importance of this tale, just think that the Virgin of Bonaria is the highest patron of and protector of all seafaring folk. Her singular story explains why this is so.

As the story goes, on 25 March 1370 a ship, bound from Catalonia to Italy, got caught in a sudden violent storm. Seeing that things were worsening and to avoid becoming food for the fish, its Captain ordered that the ship’s cargo jettisoned into the sea: in the face of death attachment to material goods is the first defect we lose! The last object to be thrown overboard was a large heavy chest whose contents were unknown to the sailors. But as soon as the chest hit the surface of the sea, the storm immediately abated. The sailors - notoriously scarcely interested in metaphysical issues - failed to ask themselves whether the throwing of the chest overboard could have had caused the storm to stop; instead, they exulted for their narrow escape, some with prayers and others with curses.

The mysterious chest, now floating like a boat, went its own way, following an entirely different course from that planned by the and his customer. Indeed, it is not rare to come upon chests which obstinately refuse to accept the destiny others had intended for them – just think of auctions of repossessed assets for example! Eventually, the solitary voyage of our chest ended on the beach fronting the hill of Bonaria, near Cagliari. Can you think of anything more intriguing and interesting than a locked chest washed up by the sea on a beach? We certainly can’t. So we can perfectly understand the great interest of the town’s inhabitants for this object, which became even greater and feverish once they that no one was able either to lift the mysterious chest or open it.

Faced with this extraordinary phenomenon, worried this could portend either a miracle or the devil’s work, the good citizens of Cagliari enlisted the help of the Mercedarian friars who lived and prayed in their monastery on the hill of Bonaria. The friars came down from their sacred abode, and to the amazement of all, they lifted the chest effortlessly, a sign that the strength needed here was that of faith, not of muscle. With their load, followed by a procession of curious townsfolk, they made their way back to the monastery, where they proceeded to open the chest, again with no great problems. When the contents appeared before their eyes, many of the mysteries and strange events that from the start had surrounded the object washed in by the sea rapidly became clear. A great wooden statue, that’s what the chest contained. A wooden statue depicting the Virgin with the Child. Just imagine the joy of the friars and citizens when faced with this sight, as the lid was slowly opened. Their joy which became astonished adoration, when finally they saw that the Madonna was holding in her right hand a and that this candle, wonder of wonders, was alight!

So perhaps now you can better understand why an island dweller, even if only for a moment, always his home shores: he’s signs of some miraculous shipwreck of God on his land.