Sardinia is land. The sea surrounds it, pervades it, transforms it, shapes it; a transcendent sea that comes out on the side of metaphysics. 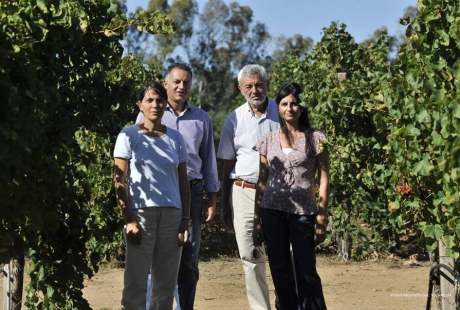 But Sardinia is land, first and foremost land. If you truly try to feel her, if you truly try to touch her essence, you will first perceive the land. And when we talk about land here we are not referring to the matter but at the limit the substance and certainly the character. So when we say that Sardinia is land, we mean that Sardinia is maternal, effeminate, solid, tangible, fertile, creative and that all of this shapes the virtues of those who are born (or reborn) here, instilling in them patience, perseverance, strength, grace, dignity, creativity.

If this is truly the land from which Sardinia springs, if this is truly the stuff from which her people are made, then there is something that can be drunk and in which the substance that nurtures the entire island is concentrated and sublimated, taking on a precise colour, taste, aroma and fragrance. This something is wine. And as we’re from Alghero, we can but single out the wine of the people of Alghero, “Poderi Parpinello”: 18 hectares of vineyards planted in calcareous marls, conglomerates and sandstone, from which the vines blissfully absorb nutrients, flavours and mysteries that are then knowledgably transfused into the wine produced by Giampaolo and his son Paolo Parpinello.

The vine varieties cultivated by the Parpinello family are the most Sardinian you could get in terms of oenology: Cannonau, a strictly native black grape wine variety that gives life to “San Costantino”; “Cagnulari”, a variety of, most probably, Spanish origin, traceable to the Aragonese domination of the 17th century; “Monica” whose presence in Sardinia is due to several Spanish monks who planted it between Sassari and Alghero around the year 1000; and then of course Vermentino, without doubt the most famous Sardinian white grape wine variety, from which the Parpinello family derives their “Sessantaquattro” and “Ala Blanca” wines.

So what, then, do we like so much about “Poderi Parpinello” wines? The philological precision with which Giampaolo and Paolo interpret oenology, the heart-felt care they heap upon their grapes, the curious and smart modernity of their winemaking techniques, the unmistakable character of their wines, in other respects so radically traditional. But above all we love the fact that they leave a kind of autobiographical imprint in their products, as well as all of those lyrical moments that, taking exception to the univocal linearity of passing time, forces one’s thoughts to linger and reflect, to then be amazed at being, of having always been.

Just like the story behind the name “Ala Blanca”.
‘Here are the white wings!’ cried out the children when the seagulls appeared in flight above the vineyards.