The feel of stone at Porto Flavia

We have spoken of Sardinia’s pink granite, of the mining area of Buggerru, only last week of the monolithic ‘Fairies’ House’ of Sedini: evidently, in this period we are attracted by stone. 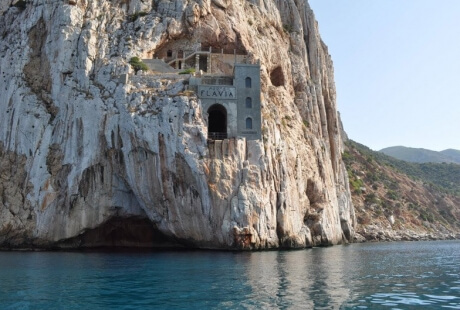 Not that our hearts are made of that material (how could it be – we’re close to Christmas!). Rather, those who know even a little about Sardinia will know that it’s not just a question of , but also of land and rock. The constant interaction of sea and rock constitutes the essence of Sardinia. A perfect example of this is Porto Flavia.

A mining infrastructure in the area of Masua (Iglesias), perched on the rugged side of a mountain dropping sheer into the sea, Porto Flavia is a striking example of the close relationship of the rock with the sea on our island. This unique structure was created in 1924 based on a project of Venetian engineer Cesare Vecelli; indeed Venetians are well versed in the art of combining stone with water. The purpose of the project was to improve the efficiency of ship loading operations as well as the harsh living conditions of the miners. While previously the workers themselves had to pick up the ore dug out of the mine and carry it to the small boats known as , once Porto Flavia was built, the ore was loaded directly on the ships from above using a conveyor system. This obviously reduced manual work and improved economic results. it must have a been a truly amazing sight to see the way in which the mountain seemed, by the use of ingenious rotating mechanisms, to empty piece by piece into the sea, to be transported elsewhere.

After WWII, mining activity declined rapidly for several reasons. Thus, activity at Porto Flavia dwindled until it finally came to a halt. As soon as they are abandoned, such structures decay, fall in on themselves: they fade and corrupt. Because the sense that animated them is lost, they fall into non-existence, hiding in the folds of collective forgetfulness. Then, fortunately, as time passes, as grief is worked through, with better personal and understanding, we rethink these spaces, we give them an aim and a sense, different from before but equally useful to bring them back to life. And that’s what happened to Porto Flavia too: the mining history of Sardinia now attracts new interest and this structure has become a fascinating and eloquent monument.

After years of painstaking restoration, today Porto Flavia can again be visited and believe me the visit will be truly impressive: with its splendid scenic backdrop, the whispers of history which run through these walls, the solemn reminder of the harsh living conditions of miners. Seen from the sea, it might seem like the extravagant home of some romantic gentleman seeking sublime experiences perched over the sea. But as you slowly approach, you will increasingly feel the sense of a historical relic, architecture imprinted in the very soul and essence of Sardinia.