The fiery story of Sant’Antonio Abate

From time immemorial, human beings have attempted to explain the origin of things, for example, why does being exist, as opposed to non-being? 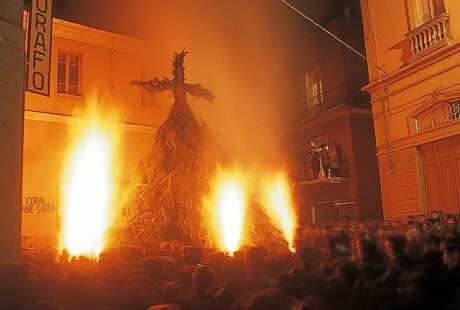 So strong is this need that to find an answer to these deep questions, that they gather all their knowledge, at times combining very diverse traditions and legends. This is one of the ways we have to make the world more familiar and understandable. A perfect example of this is the Sardinian legend of Sant'Antoni ‘e , which is about the saint, Sant’Antonio Abate (known in English as Anthony the Great or Anthony the Abbot) who is said to have brought fire to men, who did not yet know it.

But this sounds weird it? Are we to believe that according to this legend fire was only discovered as late as the Christian era? Strange indeed. But perhaps the tale doesn’t refer to the actual discovery of fire, but rather to its transformation: from destructive and devilish element to an ally of man and a blessing from God. As legend has it, Sant’Antonio Abate took pity on humans for the cold they suffered during the long icy and decided to travel to Hell, together with his inseparable piglet, to take from fire and gift it to man. When the devils blocked his path, the piglet still managed to enter Hell while the Saint, taking advantage of the confusion created, captured fire with his stick of , a plant which on contact with fire blackens but does not burn. Once back on the surface, Sant’Antonio blew on the stick and millions of sparks spread throughout the world, thus giving all peoples the possibility of lighting a fire for warmth.

The fire of hell which torments and burns sinners is thus purified from its negative association with punishment and the devil by the mediation of the Saint, who converted it into a help and a resource. At the same time, however, the legend also wishes to remind us just exactly where fire comes from to warn us of its danger and to place sinners on guard as to what awaits them in the afterlife. More in general, this tale teaches us that things can be good or evil according to whether we use them wisely and carefully.

But it is also worth noting that here Sant’Antonio Abate replaces Prometheus: popular culture, by now completely Christianized, no longer remembers well the Greek myth or no longer understands it and is forced to revisit it with Christian figures and categories. And yet, something pagan has remained in this tale, and even more so, in the rites associated with it. Just a few days ago, on the night between 16 and 17 January, Sardinia from north to south witnessed the lighting of great bonfires in front of the local churches dedicated to Sant’Antonio Abate (and not only those dedicated to him). These are fires celebrating the gift of fire received from the Saint, but they are also propitiatory and divining. In the spirals of smoke, we are indeed able to see the future, in the same way as the ashes of the sacred fire are used to cure sickness and foster the fertility of the fields. Thus, we are led to understand that Sant’Antonio Abate did not draw fire from Hell, but from much lower down: he drew it directly from the very beginning of as if it were one of those vivid dreams which alas on awakening we no longer remember.